So if you've been reading..or have read...my previous posts you have somewhat an idea what I'm talking about here.

I don't really feel like going into the whole regret thing again so I'll just go into the actual salabrasion experiance.

We, my husband & I, had already stocked up on first aid items and everything else we were going to need.  If you want to know the actual salabrasion process, go HERE.  To reiterate, we had done plenty of research on the subject as well as consulted with a dermatologist.

I took some pain medication prior to starting, also took a shot a vodka to just calm my nerves as I was begenning to get a little nervous.  After about 30 minutes or so, I sat down in a chair, my husband sat in one behind me, wrapped a Jenga block in gauze, dipped it in water then salt & began "sanding" at my tattoo.  Immediatly, it began to hurt but, of course, this was expected.

I can't tell you how painful it was.  I'd rub my legs, squeeze my hands into fists & try to focus on something else.  My husband kept needing to stop because he was rubbing so hard, the gauze was tearing into pieces every 5 minutes.  Mistake #1, we didn't stock up on enough gauze.  Mind you, we're doing this with salt.  Have you ever had an open cut & you accidently get salt in it?  It burns.  This is what I was feeling on the back of my neck x 10.  Almost like someone had a lighter way too close to my neck but I really did not want him to stop.  Every time he did, the salt just sat there on my tearing skin & it burned that much more.

20 minutes in, I began to cry silently.  By this time, it wasn't just burning but because he was using a wooden block, it felt like the bone in that area was being shaved at.  I could feel it scrubbing agains the bone and it was at this time that I decided to drink the rest of my husbands beer (I had already drank one) and I told him to open another bottle of Grey Goose for me, which he did.  I guess he was also rubbing against some nerves there because there was this "pain" radiating from my neck to my shoulders to my arms.  For those of you who lift, it's the feeling you get after you've fatigued your arms lifting heavy weights, going maximum rep.  It wasn't pain, pain..but it was uncomfortable. 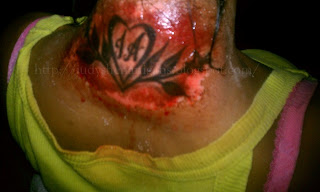 My husband stopped again for a bit so I decided to take another pain medication so I did.  Then I took another.  I realized that mixing that amount of pain medication with alcohol was not a good idea but I was in tremendous pain.  We did about 15 minutes more when we realized that we had ran out of gauze.  There was this little pile of pink and white gauze (blood) & had no more to continue OR dress the wound. 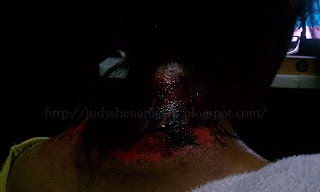 I called my mom who lives not 5 minutes away and, after speaking to her, we decided we'd jump in the car and go get the gauze from her.  I had already told her a little bit about our plan and though she didn't like the idea, she wasn't going to NOT help me relieve the pain.  I didn't get off because I didn't want her to see anything but she kept saying for me to stop, not to continue this and that she would pay for laser treatments, etc. Bless her heart.  But there's no way in hell i'd want HER to waist over 2 grand on the treatment.  Besides, we were half way done anyway. Mistake #2, don't tell your mother.

Oh but she did give us first aid tape which we had forgotten to buy.  That was Mistake #3.

Stopping for a small amount of time made it more painful, stopping for 10 minutes made it EXTRA extremely painful once we started again.  I can't explain how painful it was.  I was crying silently again, feeling like there was a torch on the back of my neck, burning, there was blood on my shirt, the area was swelling BUT it pumped me up so much to see a clean, salty gauze get scrubbing and then seeing little black spots all over (the INK!).  The ink was coming off!

I could tell my husband wanted to stop.  He would squeeze my hand, I'd keep crying, he'd ask repeatedly "are you sure you want me to keep going?" & I'd just nod or say yes.  I hated that he kept asking me questions because it felt like it took all my energy to answer him and it would come out muffled.  I'd half say, half breathe out, "stop talking".  I have no idea how many swiggs of the vodka I took but it wasn't enough.  Finally, when I could feel myself getting ready to pass out, either by the pain or medication/vodka combo, I told him he could stop.

He sanded for over an hour.

This morning, he let me sleep in of course.  I actually woke up in much less pain than I had anticipated.  I even made Fideo con Pollo, bathed the girls, put the little one down for her nap & am now writing this blog.  It hurts, especially when sweat runs down, so I'm going to heed Juan's advice and not work out.  I really need to focus on keeping the area clean and dry to prevent infection.

If you read the procedure, you know that I still have clean it with salt in 2 days.  That's really going to suck but I've already handled the worst of it, I think.

I won't post pictures yet.  Maybe in 2 days after we check the healing progress.  But that's my salabrasion experiance.  That it's barbaric, it is.  I was the most painful thing I've ever had to go through (besides childbirth).  It's not for the faint of heart, that's for sure.
Posted by Judy at 12:19 PM